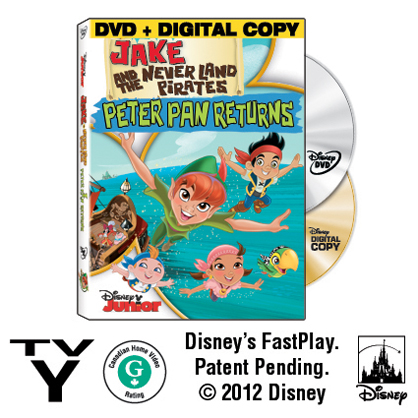 If you have little ones in the house then I am sure they are fans of Jake and the Never Land Pirates. I have 3 little ones and they love to watch this show each day. They really enjoy all of the episodes and the journeys that they take.
They were very excited when they saw previews of Peter Pan Returning to Never Land. They were counting down the days to watch the full-length adventure. I was able to surprise them as they received it in the mail to review and were freaking out when I opened the package and showed them. (ok, that may be an understatement..LOL)
They immediately asked if they could do movie time that afternoon and I agreed it would be a great idea.

They loved the full-length adventure.
You join Jake and his crew in search of Peter Pan's Shadow.

Here is some info about the DVD:

Peter Pan is back––but his shadow is missing! When Peter loses his shadow while playing a game of Catch-Me-If-You-Can, he returns to Never Land to seek help from his kid pirate friend Jake. Embarking on one of his most daring and exciting adventures ever, Jake and his kid pirate pals, Izzy and Cubby, along with lookout parrot Skully, must use teamwork to find Peter’s shadow and return it to its rightful owner. However, their mission is nearly thwarted by the fiendish Captain Hook, and his bumbling first mate Mr. Smee. But bravery and justice win the day and Jake and his Never Land pirate crew once again reveal what it takes to become heroes, in Disney’s “Jake and the Never Land Pirates: Peter Pan Returns.”
Talent: Colin Ford as Jake (“We Bought A Zoo,” TV’s “Supernatural”)
Madison Pettis (“Santa Paws,” “The Game Plan”) as Izzy
Jonathan Morgan Heit (“Bedtime Stories”) as Cubby
David Arquette (“Scream 4”) as Skully
Corey Burton (TV’s “Star Wars: The Clone Wars”) as Captain Hook
Jeff Bennet (“Tinker Bell and the Great Fairy Rescue”) as Mr. Smee
Adam Wylie (TV’s “Picket Fences”) as Peter Pan
Director: Howy Parkins
Producer: Mark Seidenberg
Executive Producer: Rob LaDuca
Episodes: 1 – Jake and the Never Land Pirates: Peter Pan Returns
2 – The Elephant Surprise!/Jake’s Jungle Groove
3 – The Pirate Pup!/Pirate Rock!
4 – The Sword and the Stone/Jake’s Home Run
5 – The Pirate Princess/The Rainbow Wand

6 – Mama Hook Knows Best/Pixie Dust Away (Never-Before-Seen Episode)
Bonus Materials: “Yo Ho, You Ready to Find Jake’s Shadow?” - Taking a cue from Peter’s shadow, now Jake’s shadow has run off and disappeared. Help Izzy and Cubby find Jake’s shadow by discovering clues to where the shadow is hiding while learning about piratelore along the way (just where did the name “doubloon” come from anyway?).
*Disclaimer - I received the item(s) mentioned above for review purposes. In no way did this alter my opinion of their products. All of my opinions are one hundred percent honest and true.*