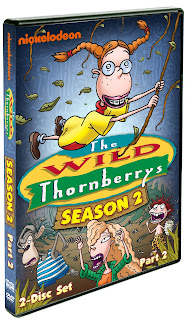 THE WILD THORNBERRYS: SEASON 2, PART 2 IN STORES APRIL 24, 2012
My kids had an opportunity to review this DVD and loved it. They never watched The Wild Thornberrys on tv so this was an all new show to them. I put it on one evening for movie time. My oldest 2 children watched it and said it was so funny. They both liked how the girl could talk and understand what the animals were saying.
This particular one comes with 2 disks.
Disc #1:
* Two's Company
* Show me the Bunny
* Reef Grief
* Thornberry Island
Disc #2:
* Dances with Dingoes
* Tamper-Proof Seal
* You Otter Know
* Have Yourself a Thornberry Little Christmas
The running time is +/- 3 hours
LOS ANGELES –– Prepare for a smashing good time as you travel around the world with the Thornberry family in Season 2! Eliza Thornberry's parents, Nigel and Marianne, have a knack for nature; they produce the award-winning nature show, "Nigel Thornberry's Animal World." And Eliza has a secret- she was given the magical ability to talk to animals! Together with her family and best friend, a surprisingly sophisticated chimpanzee named Darwin, Eliza devotes her life to helping animals and protecting nature. Two DVDs packed with incredible wild adventures will have you laughing along with the Thornberrys’ comic antics and cheering for victory with every episode! The Wild Thornberrys: Season 2, Part 2 will be released on April 24, 2012 for the suggested retail price of $19.93.


The Wild Thornberrys is an epic family adventure featuring an all-star voice cast, including Lacey Chabert (Party Of Five), Tim Curry (The Adventures Of Jimmy Neutron: Boy Genius) and Flea (The Red Hot Chili Peppers).
Here are past reviews we have done for Shout! Factory

About Shout! Factory
Shout! Factory is a diversified entertainment company devoted to producing, uncovering and revitalizing the very best of pop culture. Founders Richard Foos, Bob Emmer and Garson Foos have spent their careers sharing their music, television and film faves with discerning consumers the world over. Shout! Factory’s DVD offerings serve up classic, contemporary and cult TV series, riveting sports programs, live music, animation and documentaries in lavish packages crammed with extras. The company’s audio catalogue boasts GRAMMY®-nominated box sets, new releases from storied artists, lovingly assembled album reissues and indispensable “best of” compilations. These riches are the result of a creative acquisitions mandate that has established the company as a hotbed of cultural preservation and commercial reinvention. Shout! Factory is based in Santa Monica , California . For more on Shout! Factory, visit shoutfactory.com.
About Nickelodeon
Nickelodeon, now in its 32nd year, is the number-one entertainment brand for kids. It has built a diverse, global business by putting kids first in everything it does. The company includes television programming and production in the United States and around the world, plus consumer products, online, recreation, books and feature films. Nickelodeon’s U.S. television network is seen in 100 million households and has been the number-one-rated basic cable network for 16 consecutive years. For more information or artwork, visit http://www.nickpress.com. Nickelodeon and all related titles, characters and logos are trademarks of Viacom Inc. (NASDAQ: VIA, VIAB).

*Disclaimer - I received the item(s) mentioned above for review purposes. In no way did this alter my opinion of their products. All of my opinions are one hundred percent honest and true.*