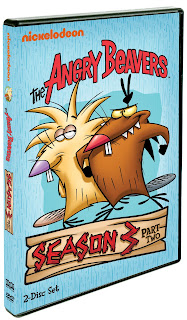 My kids had a blast watching these episodes. I try to have them watch them by themselves and then I ask for a recap when it is over. I just love the feedback I get from them.
First off, I heard them giggling throughout the episodes and mentioning how funny the characters were.
They said they really liked their names because they were so funny.
Norbert Foster and Daggett Doofus. I guess they are right. They are kind of silly.
They told me that they never knew two beavers could be so funny!
I guess you can say that the video was a huge hit with my kids.
The Angry Beavers Season 3 Part 2 is a 2 disc set.
It contains the following episodes:
Disc #1:
* Mistaken Identity / Easy Peasy Rider
* Stare and Stare Alike / I'm Not an Animal. I'm Scientist #1
* Norberto Y Daggetto En El Grapadura Y El Castor Malo / The Loogie Hawk
* Kreature Komforts / Oh, Brother?
* Das Spoot / Sqotters
* Long Tall Daggy / Practical Jerks
Disc #2:
* Nice & Lonely / Soccer? I Hardly Knew Him
* Brothers.... To the End? / Euro Beavers
* Slap Happy / Home Loners
* Ugly Roomers / Finger Licking Goofs
* Strange Allure / Partying Is Such Sweet Sorrow

Here is some additional info about the video:
﻿The Angry Beavers: Season 3 Part Two

Nickelodeon, now in its 33rd year, is the number-one entertainment brand for kids. It has built a diverse, global business by putting kids first in everything it does. The company includes television programming and production in the United States and around the world, plus consumer products, online, recreation, books and feature films. Nickelodeon’s U.S. television network is seen in more than 100 million households and has been the number-one-rated basic cable network for 17 consecutive years. For more information or artwork, visit http://www.nickpress.com . Nickelodeon and all related titles, characters and logos are trademarks of Viacom Inc. (NASDAQ: VIA, VIA.B).
About Shout! Factory
Shout! Factory, LLC is a diversified multi-platform entertainment company devoted to producing, uncovering, preserving and revitalizing the very best of pop culture. Founders Richard Foos, Bob Emmer and Garson Foos have spent their entire careers sharing their music, television and film favorites with discerning consumers the world over. Shout! Factory’s DVD and Blu-Ray™ offerings serve up feature films, classic and contemporary TV series, animation, live music and comedy specials in lavish packages crammed with extras. Shout’s audio division boasts GRAMMY®-nominated box sets, new releases from storied artists, lovingly assembled album reissues and indispensable “best of” compilations. In addition, Shout! Factory maintains a vast digital distribution network which delivers video and audio content to all the leading digital service providers in North America . Shout! Factory also owns and operates Timeless Media Group, Biograph Records, Majordomo Records and HighTone Records. These riches are the result of a creative acquisition mandate that has established the company as a hotbed of cultural preservation and commercial reinvention. Shout! Factory is based in Santa Monica , California . For more on Shout! Factory, visit www.shoutfactory.com
*Disclaimer - I am disclosing this in accordance with the FTC 16 CFR, Part 255 Guides concerning the use of endorsments and testimonials in advertising. I received the item(s) mentioned above for free for review purposes. In no way did this alter my opinion of their products. All of my opinions are one hundred percent honest, true and my own.*