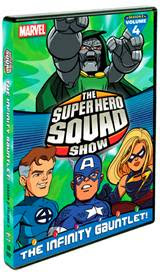 My son is 8 years old and all he talks about lately is super heroes. It seems like each day he is a different super hero saving the world, his sister and the list could just go on and on.
His imagination just runs wild as he turns into these characters. Since this phase started he came across a show called The Super Hero Squad. It is all of his favorite Marvel Super Heroes in one show. He tells me repeatedly that this is his new favorite show and hopes they keep coming out with new episodes!
Well, recently he was very surprised when he received a package in the mail. It was The Super Hero Squad Show - The Infinity Gauntlet DVD to review. He immediately got excited and begged to do movie time that afternoon. Of course I agreed and his 6 year old sis tagged along to watch too.
He said the movie was Awesome and immediately asked when the next one was coming out!!
If you have a little Super Hero in your home then you will definately have to share this DVD with them. We highly recommend it!
Please comment on which Super Hero is your childs favorite.
Here is some information about this DVD:

﻿The Conclusion of the Outrageous Second Season!

The Super Hero Squad Show: The Infinity Gauntlet!
Season 2, Volume 4
OWN IT ON DVD AUGUST 21, 2012
FROM SHOUT! FACTORY KIDS
With Thanos locked away in the Soul Stone and Doctor Doom continuously plotting his revenge, the Squaddies must Hero Up for their final battle against the Dark Surfer that will determine the fate of the universe. Join Iron Man, Thor, Hulk, Captain America , Wolverine, and Falcon in this super-powered, family friendly series, The Super Hero Squad Show!
On August 21, 2012, Shout! Factory, in collaboration with Marvel, will release The Super Hero Squad Show: The Infinity Gauntlet! Season 2, Volume 4 on DVD, featuring the final six episodes from the second season of this critically acclaimed animated series along with special bonus feature Marvel Super Heroes™: What The ___? Featuring the X-Men vs. The Avengers. This is a must-have for families, loyal fans, and Marvel enthusiasts. This DVD is priced to own at US $14.93 SRP.
This hit series combines adventure and comedy that allows kids to discover the excitement of Marvel with some of their favorite Super Heroes. The Super Hero Squad Show currently airing on The Hub TV network Saturday mornings at 2:30 pm EST / 11:30 am PST, and features the voice talents of Ty Burrell (Modern Family), Jane Lynch (Glee), Michael Dorn (Star Trek: The Next Generation), James Marsters (Buffy The Vampire Slayer), Kevin Sorbo (Hercules: The Legendary Journeys) and Marvel Comics legend Stan Lee!
Season 2 Volume 4 Episodes:

Marvel Super Heroes™: What The ___? Featuring the X-Men vs. The Avengers

Marvel Entertainment, LLC, a wholly-owned subsidiary of The Walt Disney Company, is one of the world's most prominent character-based entertainment companies, built on a proven library of over 8,000 characters featured in a variety of media over seventy years. Marvel utilizes its character franchises in entertainment, licensing and publishing. For more information visit www.marvel.com . Super Hero(es) is a co-owned registered trademark.
About Shout! Factory

Shout! Factory, LLC is a diversified multi-platform entertainment company devoted to producing, uncovering, preserving and revitalizing the very best of pop culture. Founders Richard Foos, Bob Emmer and Garson Foos have spent their entire careers sharing their music, television and film favorites with discerning consumers the world over. Shout! Factory’s DVD and Blu-Ray™ offerings serve up feature films, classic and contemporary TV series, animation, live music and comedy specials in lavish packages crammed with extras. Shout’s audio division boasts GRAMMY®-nominated box sets, new releases from storied artists, lovingly assembled album reissues and indispensable “best of” compilations. In addition, Shout! Factory maintains a vast digital distribution network which delivers video and audio content to all the leading digital service providers in North America . Shout! Factory also owns and operates Timeless Media Group, Biograph Records, Majordomo Records, HighTone Records and Video Time Machine. These riches are the result of a creative acquisition mandate that has established the company as a hotbed of cultural preservation and commercial reinvention. Shout! Factory is based in Santa Monica , California . For more on Shout! Factory, visit www.shoutfactory.com
*Disclaimer - I am disclosing this in accordance with the FTC 16 CFR, Part 255 Guides concerning the use of endorsments and testimonials in advertising. I received the item(s) mentioned above for free for review purposes. In no way did this alter my opinion of their products. All of my opinions are one hundred percent honest, true and my own.*
Posted by Unknown at 9:07 PM