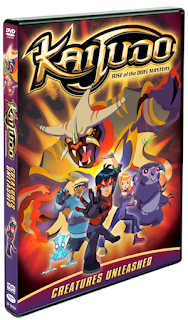 You can own your own collectible DVD on December 4, 2012 from SHOUT! Factory.

My son had the opportunity to review this one and thought it was awesome! His eyes were literally glued to the screen watching it. He told me it was about a boy  (he thinks a teenager), that was picked to learn Kaijudo. He really liked all of the cool characters too. He mentioned that alot of boys will probably be adding this to their Christmas lists this year.

Here is some info about the video:
This holiday season, kids and families are invited on a wondorous journey into the imaginative world of Kaijudo: Rise of the Duel Masters, a current animated hit series produced by Hasbro Studios and Wizards of the Coast. Featuring the voice talent of popular actors Scott Wolf, Freddy Rodriguez, John DiMaggio, Oded Fehr, Phil LaMarr, David Sobolov, Kari Wahlgren and Jason Marsden, this popular action-fantasy series offers an inspiring story about a young hero, Ray, who possesses the rare ability to befriend and duel alongside fantastical creatures from a parallel dimension. It's up to Ray to master the ancient art of Kaijudo in order to protect both world. Moreover, this adventure-filled series highlights the tales of friendship, loyalty and determination, and further addresses the show's central theme of anti-bullying.

Here is a couple sneak peeks:


Hasbro, Inc. (NASDAQ: HAS) is a branded play company providing children and families around the world with a wide-range of immersive entertainment offerings based on the Company's world class brand portfolio. From toys and games, to television programming, motion pictures, digital gaming and a comprehensive licensing program, Hasbro strives to delight its global customers with innovative, well-known and beloved brands such as TRANSFORMERS, LITTLEST PET SHOP, NERF, PLAYSKOOL, MY LITTLE PONY, G.I. JOE, MAGIC: THE GATHERING and MONOPOLY. The Company’s Hasbro Studios develops and produces television programming for markets around the world. Programming in the U.S. is distributed on The Hub TV Network, a multi-platform joint venture between Hasbro and Discovery Communications (NASDAQ: DISCA, DISCB, DISCK). Through the Company's deep commitment to corporate social responsibility, including philanthropy, Hasbro is helping to build a safe and sustainable world for future generations and to positively impact the lives of millions of children and families every year. It has been recognized for its efforts by being named one of the “World’s Most Ethical Companies” and is ranked as one of Corporate Responsibility Magazine’s “100 Best Corporate Citizens.” Learn more at www.hasbro.com . © 2012 Hasbro, Inc. All Rights Reserved.


About Wizards of the Coast

Wizards of the Coast LLC, a subsidiary of Hasbro, Inc. (NASDAQ:HAS), is the leader in entertaining the lifestyle gamer. The company holds an exclusive patent on trading card games (TCGs) and their method of play and produces the premier trading card game, Magic: The Gathering. Wizards is also a leading publisher of roleplaying games, such as Dungeons & Dragons, and publisher of fantasy series fiction with numerous New York Times best-sellers. For more information, visit the Wizards of the Coast Web site at www.wizards.com .


*Disclaimer - I am disclosing this in accordance with the FTC 16 CFR, Part 255 Guides concerning the use of endorsements and testimonials in advertising. I received the item(s) mentioned above for free for review purposes. In no way did this alter my opinion of their products. All of my opinions are one hundred percent honest, true and my own.*