We are excited that we get to offfer a giveaway to our viewers for a Willie Halloween Costume. The Duck Dynasty - Willie Adult Costume includes wig, beard, bandana, and vest. Does not include shirt, pants or shoes.This is an officially licensed Duck Dynasty product.

Just enter at the bottom of this post and Good Luck. 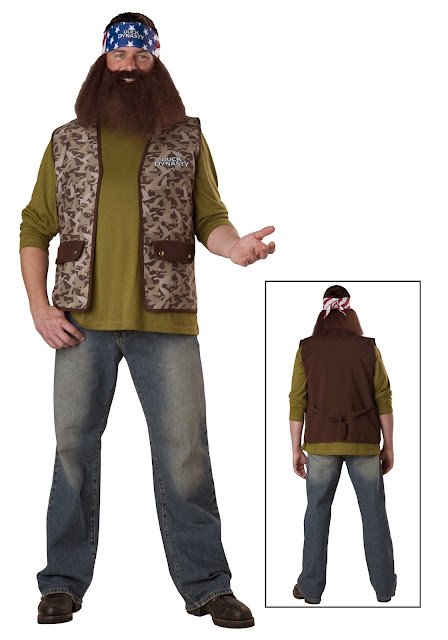 You may not be able to run a bayou-based duck hunting empire, have southern charm or a sharp sense of humor, but this Halloween, you can join the Robertson clan - in costume only - for some down home hijincks!

The costumes are currently available nationally in stores and online at Wal-Mart, Party City and Buycostumes.com. Retail pricing will range from $29.98 to $39.98srp.

The bearded, bayou-dwelling redneck nation has been established, and after shattering records last season, America's most recognizable family is back for a funny, functional, and family-filled Season 4. The new season premiered on August 14 at 10PM and the one-hour episode became the number one nonfiction series telecast in cable history with 11.8 million viewers tuning in.

The Robertsons have built a multi-million dollar sporting empire manufacturing duck calls in Monroe, Louisiana and have earned a seat in homes across the country with their special brand of down-home practicality, charm and humor. Every day affairs are met by Willie's growing business ideas, Phil's fatherly advice, Mrs. Kay's delicious recipes, Uncle Si's oddball philosophies and Jase's endless need to hunt, fish and rib his brothers. They are the family that works together, plays together and of course, eats together. The whole family joins in for more adventures on the bayou, where day to day life may be mundane for some, but for the Robertsons, is anything but dull.

A&E is "Real Life. Drama." Now reaching more than 99 million homes, A&E is television that you can't turn away from; where unscripted shows are dramatic and scripted dramas are authentic. A&E offers a diverse mix of high quality entertainment ranging from the network's original
scripted series, including "The Glades" and "Longmire,"to signature non-fiction franchises, including the Emmy-winning "Intervention," "Duck Dynasty," "Hoarders," "Beyond Scared Straight" and "Storage Wars," and the most successful justice shows on cable, including "The First 48.