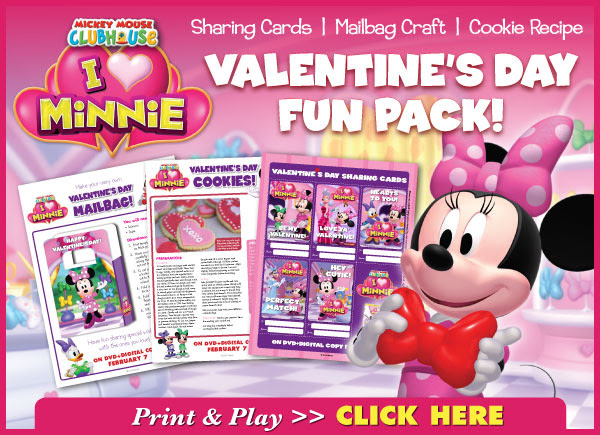 In Celebration of Mickey Mouse Clubhouse: I Heart Minnie release on Feb.7th you can click the graphic above for Valentine's Day Fun Pack!
I don't know about you all but Mickey Mouse Clubhouse is a HUGE Hit in our house!!! My baby girl is in love with Mickey and his gang and just can't get enough of all of the shows. We make a point to watch them each morning. I was so excited when we had the opportunity to review this new DVD that will be launching on Feb 7th. When I showed my kids they got so excited and my baby girl started saying, " Hot Dot." Of course, for the Hot Dog song sung by the gang.
I don't want to tell you what the show is all about but I do want to tell you that my kids loved it!!!
If your kids are fans then you will definately want to run out to your local store and buy this for them. It would make the perfect gift for Valentine's Day!
It is our Favorite Clubhouse movie to date!!
Here is some info about the new DVD: 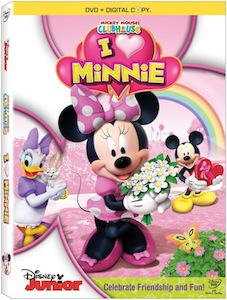 Mickey Mouse Clubhouse: I Minnie has been packaged to include five, fun-filled episodes - each underlining the themes of friendship, teamwork, sharing and problem solving – and an all new bonus feature “You’re Invited to Minnie’s Birthday Party,” as well as two complimentary Best Friend necklaces to keep as mementos and/or to share with a very special someone this Valentine’s Day.
The five classic episodes include:
· Minnie & Daisy’s Flower Shower (All-New, Never-Before-Seen) - The botanical highlight of the year is in trouble, unless Minnie and Daisy can get their flowers to bloom! Together, they board the glove balloon to help coax the clouds to sprinkle much needed rain.
· Daisy’s Dance -Clap your hands and tap your feet! Join Daisy, as she gets ready for one of the most important events of her life––performing in the big talent show!


· Daisy’s Pet Project - The Pet Parade is almost here and Daisy needs to find the perfect animal for which she can love and care. But it’s not as easy as she thinks and soon she has three new friends: an elephant named Bubbles, a giraffe called Longfellow and a bunny called Captain Jumps-a-lot!
· Minnie’s Rainbow - After a brightly colored rainbow appears over the clubhouse, Minnie searches for the pot of gold that’s supposed to be at its end. Along the way, she meets a leprechaun and discovers that not all treasure turns out to be as she expected!
· Minnie’s Birthday – Today is Minnie’s birthday, but the Mickey Mouse Clubhouse friends need to set up her birthday party.