﻿The First 10 Episodes from the Second Season of
Nickelodeon’s Hit Animated Series Arrive on DVD From Shout! Factory 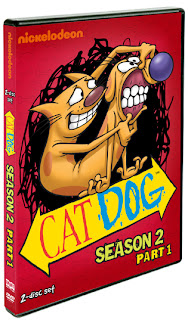 LOS ANGELES-April 11, 2012 – A brand-new season of crazy CatDog adventures begins! They’re the craziest set of conjoined twins you’ll ever meet — the culturally refined Cat, and Dog, who’s . . . well . . . not so much! But together, CatDog make it all work by both using and strengthening their own friendship, providing their own excitement and even getting into their own heap of hilarious trouble!
CatDog: Season 2, Part 1 includes the first ten complete episodes of CatDog’s outrageous second season! A must-have for Nickelodeon fans and animation aficionados alike, this 2-DVD set will be released on June 5, 2012 with a suggested retail price of $19.93.

Here are past reviews we have done for Shout! Factory


About Shout! Factory
Shout! Factory is a diversified entertainment company devoted to producing, uncovering and revitalizing the very best of pop culture. Founders Richard Foos, Bob Emmer and Garson Foos have spent their careers sharing their music, television and film faves with discerning consumers the world over. Shout! Factory’s DVD offerings serve up classic, contemporary and cult TV series, riveting sports programs, live music, animation and documentaries in lavish packages crammed with extras. The company’s audio catalogue boasts GRAMMY®-nominated box sets, new releases from storied artists, lovingly assembled album reissues and indispensable “best of” compilations. These riches are the result of a creative acquisitions mandate that has established the company as a hotbed of cultural preservation and commercial reinvention. Shout! Factory is based in Santa Monica , California . For more on Shout! Factory, visit http://www.shoutfactory.com/  .
About Nickelodeon
Nickelodeon, now in its 33rd year, is the number-one entertainment brand for kids. It has built a diverse, global business by putting kids first in everything it does. The company includes television programming and production in the United States and around the world, plus consumer products, online, recreation, books and feature films. Nickelodeon’s U.S. television network is seen in more than 100 million households and has been the number-one-rated basic cable network for 17 consecutive years. For more information or artwork, visit http://www.nickpress.com/ . Nickelodeon and all related titles, characters and logos are trademarks of Viacom Inc. (NASDAQ: VIA, VIA.B).