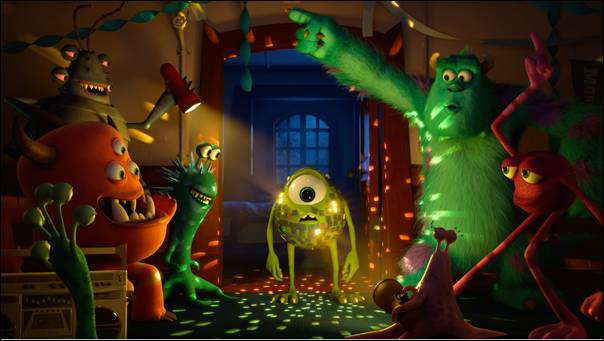 "Billy Crystal's an amazing comedic actor," remarked Dan Scanlon, Director, Disney•Pixar's Monsters University. "He gave us so much fun material, we decided to cut four slightly different versions of the trailer. We are so happy to have him back as Mike!"
You can also watch all four versions of the new trailer and vote for your favorite Mike sleep talking line on the official Monsters University Facebook Page – http://www.facebook.com/PixarMonstersUniversity . The winning line will be drawn up by a Pixar artist and shared EXCLUSIVELY with the fans of Monsters University.
MONSTERS UNIVERSITY (In Disney Digital 3D™)

Voice Talent: Billy Crystal, John Goodman, Steve Buscemi, Dave Foley, Julia Sweeney, Joel Murray, Peter Sohn
Director: Dan Scanlon
Producer: Kori Rae
Mike Wazowski and James P. Sullivan are an inseparable pair, but that wasn’t always the case. From the moment these two mismatched monsters met they couldn't stand each other. “Monsters University” unlocks the door to how Mike and Sulley overcame their differences and became the best of friends.
Screaming with laughter and fun, “Monsters University” is directed by Dan Scanlon (“Cars,” “Mater and the Ghostlight,” “Tracy”) and produced by Kori Rae (“Up,” “The Incredibles,” “Monsters, Inc.”). The film opens in U.S. theaters on June 21, 2013, and will be shown in Disney Digital 3D™ in select theaters.
Notes:
“Monsters, Inc.,” originally released on November 2, 2001, was nominated for four Oscars®: Best Animated Feature Film, Best Original Score, Best Sound Editing and Best Original Song—“If I Didn’t Have You,” for which it won.
“Monsters University” will hit U.S. theaters nearly 12 years after the “Monsters, Inc.” theatrical debut.
· Billy Crystal and John Goodman reprise their roles in the prequel as the wise-cracking Mike Wazowski and lovable Sulley.
· “Monsters University” features a host of new faces and a few returning favorites from “Monsters, Inc.”
** This is a Sponsored Post **