An American Girl: McKenna Shoots for the Stars {Review} 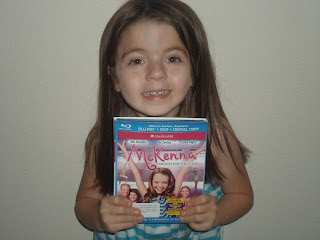 Recently my daughter had the opportunity to review this wonderful DVD. My daughter decided to do a movie time in our loft located upstairs. I made her some popcorn and away she went. She watched the entire video and said she really liked it. She said she does some really cool tumbling in the movie and was having trouble doing her work in school. She said that others helped her so she would get better.

I just love when I have the kids sit to watch a video and then give me their review of it. I love how they relay it to me. All I have to go by is the back of the box it comes in. I want them to give me their opinions beings other kids will be watching it.
Here is some information about the video:

Nia Vardalos (My Life In Ruins, My Big Fat Greek Wedding), Jade Pettyjohn (“The United States of Tara”) as McKenna™, Ian Ziering (“Beverly Hills 90210”), Kerris Dorsey (Moneyball, “Brothers & Sisters”) and former Olympic gymnast Cathy Rigby (Broadway’s “Peter Pan”).
A modern and heartwarming original story about a young girl whose dream to compete as a world class gymnast is jeopardized when she begins to have trouble in school, An American Girl: McKenna Shoots for the Stars™ helps girls learn to believe not only in their family and friends but also themselves. With more than 139 million books and 21 million dolls sold, American Girl® has earned the loyalty of millions of girls and the praise and trust of parents and educators. Just in time for the Summer Games, this fun family film on Blu-ray™ Combo Pack and DVD is available only at Wal-Mart, American Girl® retail stores and americangirl.com. A must-own addition for American Girl® fans, the film can also be purchased via Digital Download through a variety of online retailers.
The An American Girl: McKenna Shoots for the Stars™ Blu-ray™ Combo Pack delivers the film in perfect hi-def picture and perfect hi-def sound. The Blu-ray™ Combo Pack also includes UltraViolet™, a DVD, and a
Digital Copy of the film – so consumers can truly enjoy the movie anytime, anywhere, on the device of their choice! UltraViolet™ is the revolutionary new way for consumers to collect movies and TV shows and put them in the cloud. From there, they can download and stream instantly to computers, tablets and smartphones. In addition, consumers can redeem a Digital Copy of the film from a variety of retail partners, who offer many viewing options including iTunes®, iPad®, iPhone®, iPod™ touch, Android, connected televisions, Blu-ray player apps and more!
SYNOPSIS
Meet McKenna Brooks™, a determined and confident young gymnast, in this all-new modern-day adventure. McKenna™ is on track to make the regional competitive gymnastics team but off-track in school, where she’s suddenly struggling to keep up. When her teacher suggests a tutor, she’s embarrassed and desperate to keep it a secret from her friends. Then a bad fall at the gym sidetracks her from her favorite sport. Will she recover in time to make the team? Can she succeed in school, too? McKenna™ needs to focus on her strengths to overcome her challenges – and, with the help of family and friends, find a way to believe in herself again.
CAST AND FILMMAKERS:

Universal Studios Home Entertainment is a unit of Universal Pictures, a division of Universal Studios (http://www.universalstudios.com/ ). Universal Studios is a part of NBCUniversal, one of the world’s leading media and entertainment companies in the development, production and marketing of entertainment, news and information to a global audience. NBCUniversal owns and operates a valuable portfolio of news and entertainment television networks, a premier motion picture company, significant television production operations, a leading television stationsgroup and world-renowned theme parks. Comcast Corporation owns a controlling 51% interest in NBCUniversal, with GE holding a 49% stake.
About American Girl
American Girl Brands is a wholly owned subsidiary of Mattel (NASDAQ:MAT) (http://www.mattel.com/ ), the world’s leading toy company. Since American Girl’s inception in 1986, the company has devoted its entire business to celebrating the potential of girls ages 3 to 12. American Girl encourages girls to dream, to grow, to aspire, to create, and to imagine through a wide range of engaging and insightful books, age-appropriate and educational products, and unforgettable experiences. In meeting its missionwith a vigilant eye toward quality and service, American Girl has earned the loyal following of millions of girls and the praise and trust of parents and educators. To learn more about American Girl or to request a free catalogue, call 1-800-845-0005, or visit http://www.americangirl.com/ .