﻿The Smurfs™ and the Magic Flute
HITS U.S HOME ENTERTAINMENT SHELVES NATIONWIDE
OWN IT ON DVD AUGUST 14, 2012 FROM FABULOUS FILMS 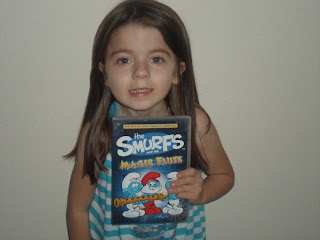 The smurfs were one of my favorite cartoons to watch as a little girl. I am so excited to be able to share this wonderful cartoon with my little ones too! They have seen a few on tv and were excited to do this review. We sat down for movie time one afternnon as it was raining cats and dogs outside. We popped some popcorn and snuggled up on the couch. We absolutely loved it and the said they liked every bit of it from the start to the end.  They said they just know other kids will love it too!!
Here is some info about the DVD.
Smurf fans rejoice! On August 14, 2012, the original full-length animated feature The Smurfs and the Magic Flute will finally debut on DVD for the first time in the U.S. from Fabulous Films. Based on the original comic book story by the same name, this beloved animated movie classic debuted in U.S theaters in 1983 and has remained a fan favorite for more than twenty-five years. Delivering wholesome family entertainment, The Smurfs and the Magic Flute DVD also features bonus content including an image gallery, animated menus, a glossary of Smurf terms, The Smurf Story, a character guide, and an About the Smurfs and the Magic Flute featurette. A must-have for Smurfs fans, collectors, animation enthusiasts and a new generation of kids, this collectible DVD is priced to own at $14.93 SRP and available for pre-order now.


In The Smurfs and the Magic Flute, a magical flute is just what Court Jester Peewit needs to play delightful tunes that make everyone in the kingdom dance — until the dancing turns dangerous. Sir Johan tries in vain to recover the musical instrument, but a thief named McCreep beats him to it, intending to use the flute to steal gold from the King’s subjects. It’s the Smurfs to the rescue when Papa Smurf devises a plan to create a second magical flute, and Peewit and Sir Johan go on a great adventure to find McCreep, win the musical duel and save the kingdom!
DVD Bonus Content

The story of the Smurfs – a property created by Peyo – started in 1958 with the creation of comic books which were later brought to the big screen and on television. Over the years, the little blue characters haven’t just limited themselves to the page and the screen. The Smurfs have inspired records and CDs that have sold millions of copies, entire collections of figurines and toys, and many more products. In all, more than 3,000 derived products have been produced and leading brands and companies have spread their messages worldwide with the help of the Smurfs. A multitude of new projects appear regularly, thus making the success of the Smurfs planetary!
*Disclaimer - I am disclosing this in accordance with the FTC 16 CFR, Part 255 Guides concerning the use of endorsments and testimonials in advertising. I received the item(s) mentioned above for free for review purposes. In no way did this alter my opinion of their products. All of my opinions are one hundred percent honest, true and my own.*