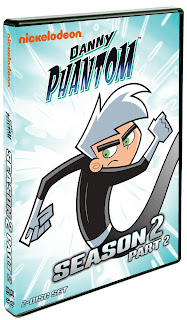 My son has always been a huge Danny Phantom fan. He was very excited recently when he was able to review Danny Phantom Season 2 Part 2 DVD.
I asked him what his favorite part of the DVD was, and he said it is when Danny turns info a superhero that looks like a ghost like figure. He said he travels into another dimension and battles all kinds of creatures.
I peeked in a few times as he was watching it. The creatures are really cool looking. Great DVD if you have a boy at home. My son is 8 1/2 and loved it!!!
It contains the following episodes:
Disc #1:
* Memory Blank
* Double Episode: The Ultimate Enemy
* The Fright Before Christmas
* Secret Weapons
* Flirting with Disaster
* Micro-Management
Disc #2:
* Beauty Marked
* King Tuck
* Massters of All Time
* Double Episodes: Reality Trip
* Double Cross My Heart
* Kindred Spirits
Here is some more info about the DVD:
Danny Phantom: Season Two, Part 2

Own it on DVD August 28th from Shout! Factory
On August 28th, the adventures of Danny Phantom continue with the second installment of the outrageous second season on DVD! Alongside his two best friends Tucker and Sam, Danny finds himself in some of the most exciting, ghoulishly entertaining situations ever, including meeting a ghost Pharaoh, traveling through time and fighting to save summer vacation! Danny Phantom: Season Two, Part 2 features 13 episodes from the second season and has a suggested retail price of $19.93. Join this ordinary teen with extraordinary abilities as he transforms himself into a ghostly superhero tasked with battling ghastly fiends from another dimension!
Danny Phantom features an all-star voice cast, including David Kaufman (The Buzz on Maggie), Grey DiLisle (Rugrats, The Fairly Odd Parents), Rickey D’Shon Collins (Recess), Colleen O'Shaughnessey (Naruto), Rob Paulsen (Pinky and the Brain), Kath Soucie (Dexter’s Laboratory, Ben 10) and Martin Mull, Frank Welker (Transformers).
About Nickelodeon

Nickelodeon, now in its 33rd year, is the number-one entertainment brand for kids. It has built a diverse, global business by putting kids first in everything it does. The company includes television programming and production in the United States and around the world, plus consumer products, online, recreation, books and feature films. Nickelodeon’s U.S. television network is seen in more than 100 million households and has been the number-one-rated basic cable network for 17 consecutive years. For more information or artwork, visit http://www.nickpress.com . Nickelodeon and all related titles, characters and logos are trademarks of Viacom Inc. (NASDAQ: VIA, VIA.B).
About Shout! Factory
Shout! Factory is a diversified entertainment company devoted to producing, uncovering and revitalizing the very best of pop culture. Founders Richard Foos, Bob Emmer and Garson Foos have spent their careers sharing their music, television and film faves with discerning consumers the world over. Shout! Factory’s DVD offerings serve up classic, contemporary and cult TV series, riveting sports programs, live music, animation and documentaries in lavish packages crammed with extras. The company’s audio catalogue boasts GRAMMY®-nominated box sets, new releases from storied artists, lovingly assembled album reissues and indispensable “best of” compilations. These riches are the result of a creative acquisitions mandate that has established the company as a hotbed of cultural preservation and commercial reinvention. Shout! Factory is based in Santa Monica , California . For more on Shout! Factory, visit www.shoutfactory.com.
*Disclaimer - I am disclosing this in accordance with the FTC 16 CFR, Part 255 Guides concerning the use of endorsments and testimonials in advertising. I received the item(s) mentioned above for free for review purposes. In no way did this alter my opinion of their products. All of my opinions are one hundred percent honest, true and my own.*