We are excited to share 2 wonderful DVDs with you from www.phase4films.com . You kids are just going to love them!
The first one is Kiara the Brave. 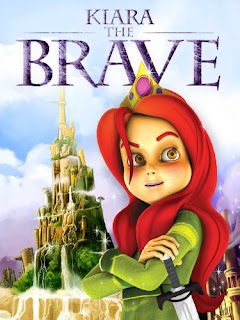 This DVD was released in June 2012, Kiara takes viewers to Dreamzone, a peaceful and a magical kingdom under the rule of King Maximus. The serene kingdom faces sudden change when the King is captured and imprisoned by his evil brother, Dreadmis. The King's daughter, courageous Princess Kiara, must conquer evil and restore harmony in Dreamzone, returning her father to the throne.
Kiara has an 80 minute run time and is rated PG.
Special DVD Features: Slide Show, Trailer, Downloadable Activity Kit
Availbility: Redbox locations, Target, Walmart, Amazon.com
My 6 year old daughter loved this movie. She said she really liked Princess Kiara and that she saved the day. I did not watch it with her as I like to get their own personal feedback. She told me that the Princess had to help save her daddy from the bad guy. She also said there are some lizard looking creatures that she thought were funny. I just love the feedback.
The second movie was Space Dogs. 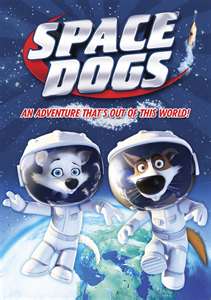 Space Dogs was released in June 2012. It is an exciting, animated tale based on the true story of Belka and Strelka, two dogs sent to space in 1960. Belka and Strelka are a circus dog and a rough-and-tumble stay who embark on an out-of-this-world adventure, humbly becoming the world's most famous canine cosmonauts.
Space Dogs has an 88 minute run time and is rated G.
Special DVD features: Slide Show, Trailer, Downloadable Activity Kit
Availability: Redbox Locations, Target, Walmart, Amazon.com
All 3 of my children watched this one. My son is is 8 and my girls, ages 6 and 19 months. I could tell they were really enjoying it throughout the movie. When it ended I asked them what they thought. They said they really liked the movie. They said that they were the coolest 2 dogs ever and I asked why. They said because they got to go to space and wear the cool suits. I just love it!!!
We were also provided with some yummy snacks to enjoy during the viewings.
We invite you to pic up a copy and some yummy treats for a fun movie night. You little ones will love them.
*Disclaimer - I am disclosing this in accordance with the FTC 16 CFR, Part 255 Guides concerning the use of endorsments and testimonials in advertising. I received the item(s) mentioned above for free for review purposes. In no way did this alter my opinion of their products. All of my opinions are one hundred percent honest, true and my own.*
Posted by Unknown at 11:15 PM