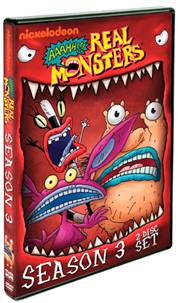 My oldest 2 children just love this show. They were able to review season 2 and loved it. When they found out they would have the opportunity to review season 3 that were even more excited.
Right away they asked when they could do movie time so they could watch it. I set it all up but I have to say with these that they cannot possibly watch them all in one sitting. I plan 2 or 3 movie times over a week or two so they are able to watch all of the episodes on the discs.
There 3 favorite little monsters were back to make them giggle throughout the adventures. They went upstairs into our loft to watch it and I could hear them just giggling throughout the episodes. They said the monsters are so funny and crazy looking.

* Krumm Gets Ahead / It's Only a Movie
* Monster Blues / I Heard the Snorch Call My Name
* Amulet of Enfarg / Bad Hair Day
* Who'll Stop the Brain? / Cement Heads
* Ickis and the Red Zimbo / Oblina and the Three Humans
* Baby, It's You / Monsters are Fun
* You Only Scare Twice / Less Talk, More Monsters
* Out of the Past / Ship of Fools
* Eye Full of Wander / Lifestyles of the Rich and Scary
* Fistful of Toenails / Blind Love, Monster Love
* Wake Me When It's Over / Things That go Bump
* The Master Monster / Slumber Scare
Aaahh!!! Real Monsters aired on Nickelodeon from 1994-2000 and returned in 2002 on the Nicktoons Network. In 2006, the show began airing on Nick Rewind. The show was nominated for a Daytime Emmy in Outstanding Achievement in Animation.
About Nickelodeon
Nickelodeon, now in its 33rd year, is the number-one entertainment brand for kids. It has built a diverse, global business by putting kids first in everything it does. The company includes television programming and production in the United States and around the world, plus consumer products, online, recreation, books and feature films. Nickelodeon’s U.S. television network is seen in more than 100 million households and has been the number-one-rated basic cable network for 17 consecutive years. For more information or artwork, visit http://www.nickpress.com. Nickelodeon and all related titles, characters and logos are trademarks of Viacom Inc. (NASDAQ: VIA, VIA.B).
About Shout! Factory
Shout! Factory, LLC is a diversified multi-platform entertainment company devoted to producing, uncovering, preserving and revitalizing the very best of pop culture. Founders Richard Foos, Bob Emmer and Garson Foos have spent their entire careers sharing their music, television and film favorites with discerning consumers the world over. Shout! Factory’s DVD and Blu-Ray™ offerings serve up feature films, classic and contemporary TV series, animation, live music and comedy specials in lavish packages crammed with extras. Shout’s audio division boasts GRAMMY®-nominated box sets, new releases from storied artists, lovingly assembled album reissues and indispensable “best of” compilations. In addition, Shout! Factory maintains a vast digital distribution network which delivers video and audio content to all the leading digital service providers in North America . Shout! Factory also owns and operates Timeless Media Group, Biograph Records, Majordomo Records, HighTone Records and Video Time Machine. These riches are the result of a creative acquisition mandate that has established the company as a hotbed of cultural preservation and commercial reinvention. Shout! Factory is based in Santa Monica , California . For more on Shout! Factory, visit www.shoutfactory.com

*Disclaimer - I am disclosing this in accordance with the FTC 16 CFR, Part 255 Guides concerning the use of endorsments and testimonials in advertising. I received the item(s) mentioned above for free for review purposes. In no way did this alter my opinion of their products. All of my opinions are one hundred percent honest, true and my own.*