The Wonder Years Compete Series that you can Pre-Order Now

** Disclaimer - This is a Sponsored Post on behalf of StarVista Entertainment ** 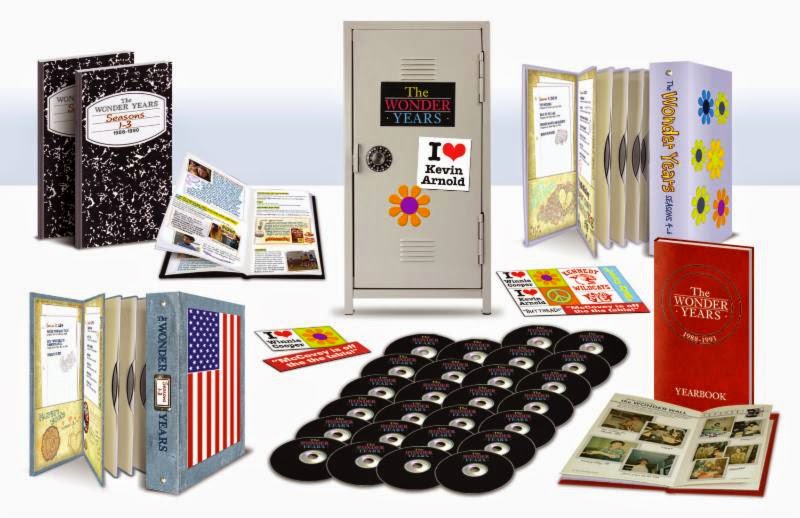 STARVISTA ENTERTAINMENT/TIME LIFE ADDS
EIGHT ADDITIONAL HOURS OF BONUS PROGRAMMING
TO THE WONDER YEARS COMPLETE SERIES
With Bonus Feature Production Wrapped, New Additions to the
Now 23 HOURS of Exclusive Extras Include Commentary on All Six Takes
of  Kevin and Winnie's First Kiss, Brand New Featurettes and the
Complete One Hour Finale as it Originally Aired on ABC
Fairfax, VA --  Production has just wrapped on the exclusive extras for
THE WONDER YEARS COMPLETE SERIES - including featurettes, commentary, in-depth interviews and more -and StarVista Entertainment/Time Life is excited to announce that eight additional hours of bonus programming will be added to the DVD set, for a total of 23 hours (from the originally announced 15)! THE WONDER YEARS COMPLETE SERIES is available for pre-ordersnow at TimeLife.com/WonderYears.

The new bonus features include:
Expanded featurettes including:
"...the (episode) where Kevin and Wayne fight about the empty bedroom"
"The final scene with Wart is absolutely brutal"
"I love (the episode) where they can see their neighbor's....uh, tomatoes!"
"Any episode with Becky Slater"
"We're thrilled to be adding eight new hours of bonus programming to the already robust set of extras," says Jeffrey Peisch, the Senior Vice President, Entertainment Programming & Marketing for StarVista Entertainment/Time Life. "Thanks to our creative, hard-working production team and the incredibly supportive cast and crew of The Wonder Years, we're going to be delivering a set sure to thrill series fans, who've been eagerly awaiting its release for years."
Never before released on DVD in its entirety - and available now for pre-order -- THE WONDER YEARS COMPLETE SERIES will be presented as a 26-disc collector's set featuring all 115 episodes housed in a replica metal locker, along with a host of extras including 23 total hours of specially-produced bonus programming --- featurettes, an incredible cast reunion 16 years in the making and never-before-seen outtakes.  THE WONDER YEARS COMPLETE SERIES will be available exclusively online at TimeLife.com/WonderYears for $249.95.  Also available day-and-date are THE WONDER YEARS EXPERIENCE ($299.95),which includes all the elements from the COMPLETE SERIES, along with a selection of limited-edition memorabilia created exclusively for this set: a Kennedy Junior High School tee shirt, tube socks, and a vintage gym bag; a Kennedy Junior High School pennant and commemorative patch, The Wonder Years collectible pins, and a newly-produced Wonder Years CD, and THE WONDER YEARS SIGNATURE EDITION ($499.95),limited to 500 sets, includes everything from the COMPLETE SERIES and EXPERIENCE editions; each set will also be hand-signed by Fred Savage, Danica McKellar and other cast members, housed in a numbered locker and  accompanied by a numbered Certificate of Authenticity.